There will be few people here in Northern Ireland who haven’t heard about the Miami Showband Massacre.

As someone in their thirties, it obviously happened before my time, but it was always something I knew about, particularly given my mum often talked about the showbands and her love for them in the 70s.

And of course, Netflix then released a documentary about the killings earlier this year which brought the massacre into the forefront once again.

Therefore, I was intrigued as to how such a terrible atrocity could be made into all-singing, all-dancing musical, written by Marie Jones and Martin Lynch.

However, the show is, in the most part, about the formation of the band (the ‘Irish Beatles’) from different groups around Ireland- Belfast, Bray and Cork- and the heyday of the showband era.

The first half of the play features fantastic live performances of the band’s hit cover songs and their own original tracks, to the delight of the audience members who knew every word!  Expect to hear  classics such as ‘Simple Simon says’ and ‘Clap your hand, Stomp your feet.’ (And the audience did!)

But course, it also deals with the 1975 tragedy and the aftermath of three of the band members being killed. This was very sensitively done and you could honestly hear a pin drop as the play depicted the band members lining up in what they thought was a normal border checkpoint, as the audience knew what was coming.

It also touches on the effect the killings had on the surviving members, in particular, Des Lee’s battle with alcoholism and the difficulty he had performing on stage without his band mates.

My only negative was the fact the six male singers performed a few different roles, so at the beginning I found it a little hard to distinguish between the three bands from which the Miami Showband was formed.

An important line in the play is “we didn’t change the world with our music, but we brought people together” and this comes across very well. The band were truly a success story, loved by people right across Ireland, regardless of religion.

I was too young to know every song but you don’t need to a fan of the showband to enjoy this well-written and well-performed play, with the live music being the real star of the show! A must see for those wanting to be taken back to the Floral Hall in Belfast!

The Miami Showband Story runs at the Grand Opera House until Saturday 17 August. 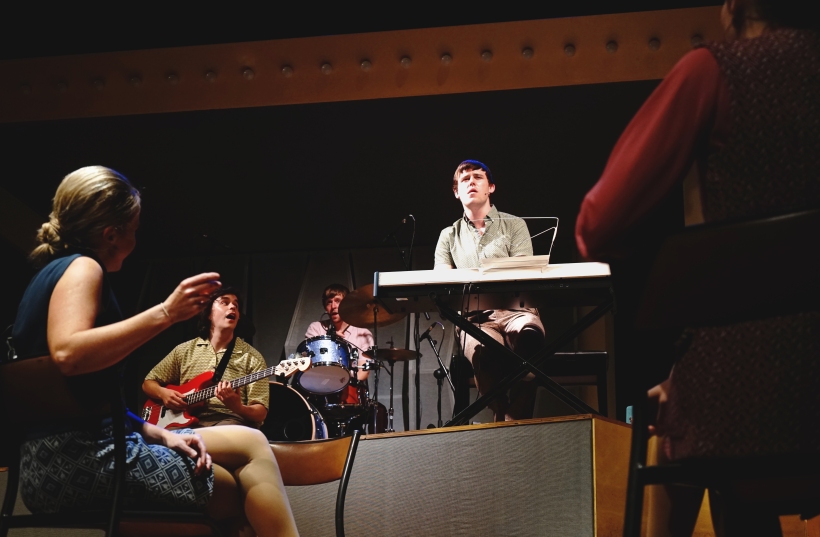 The EastSide Arts Festival kicks off today and I’ve seen loads about it online!

Having a young daughter myself, I’m always interested in what’s on offer for the wee ones so here’s a roundup of the best of the best for families. 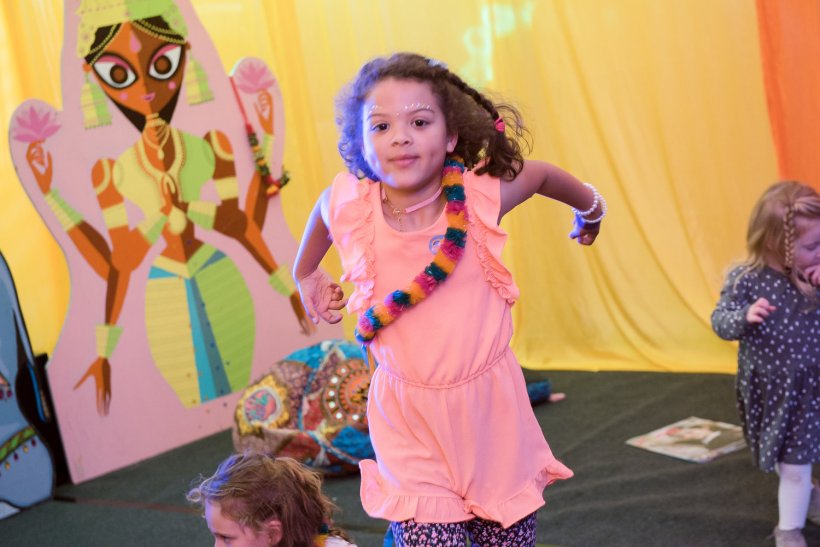 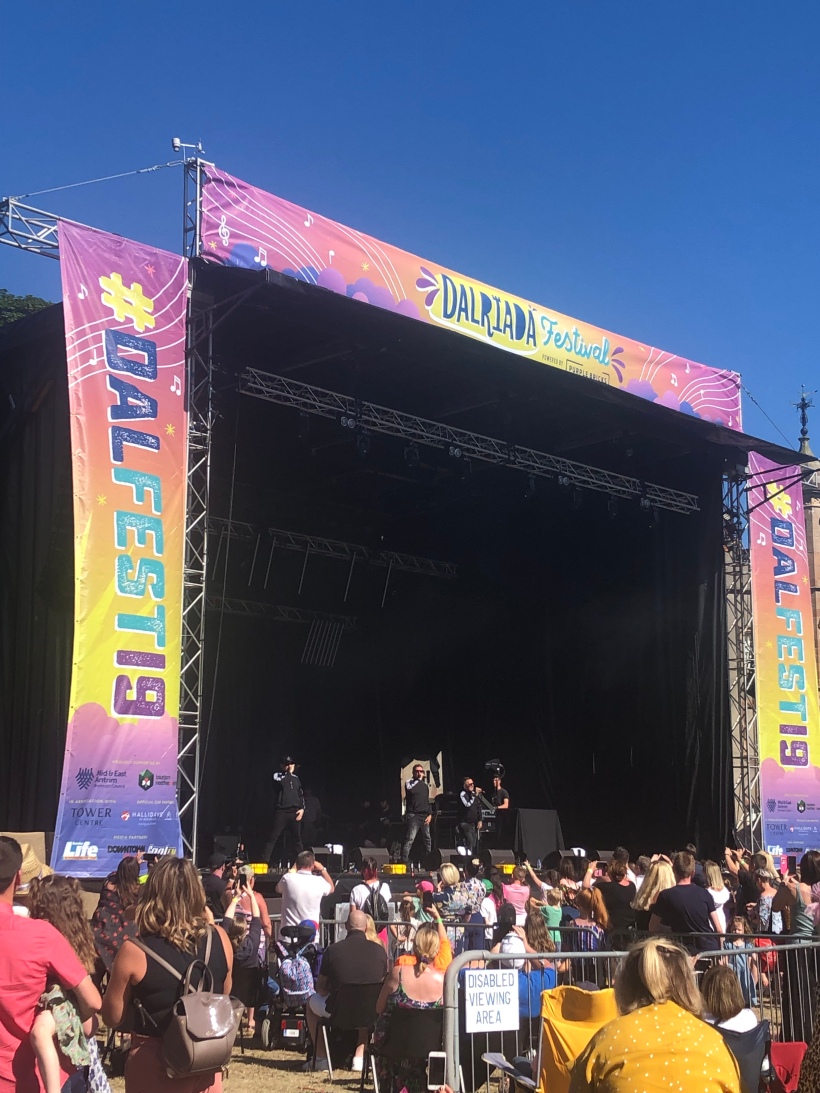 What an amazing Bank Holiday weekend we had! I’m just back to work today feeling really refreshed! (if slightly sunburnt…)

One of the highlights for me was spending the day at the Dalriada Festival on Sunday at Glenarm Castle.

I’ve been to Glenarm quite a few times and always enjoy it, but I had never been to the festival.

I’ve friends who go every year and say it’s a brilliant day out, so I was looking forward to going, especially seeing that the line-up included old favourites East 17…! (I’m a 90s boyband fanatic.)

We arrived about midday and spent over 7 hours exploring the whole festival, including visiting the Walled Garden, enjoying the fun fair rides, watching fairytale performances, eating our way around the food stalls, buying local gifts and crafts, and sitting in the sun and enjoying the music on the main stage.

To be honest we were very jealous we hadn’t camped as the set up was fantastic and we could have spent even longer there, except Niamh hadn’t slept all day and was getting quite sleepy. (She was too busy on bouncy castles, dancing, and eating ice-cream and a full 7-inch woodfired pizza to herself!!)

We would definitely consider camping/glamping next year to make the most of it as there were quite a few things we just didn’t get to do in one day.

We had such a fun day out, with the weather really making it, and it was great to see the place so packed and buzzing.

If you haven’t been before, check out the my video and slideshow of the highlights below!

Disclaimer: Entrance tickets were gifted, but everything else (activities, rides, presents, food and drink etc) were paid for. All views are my own. 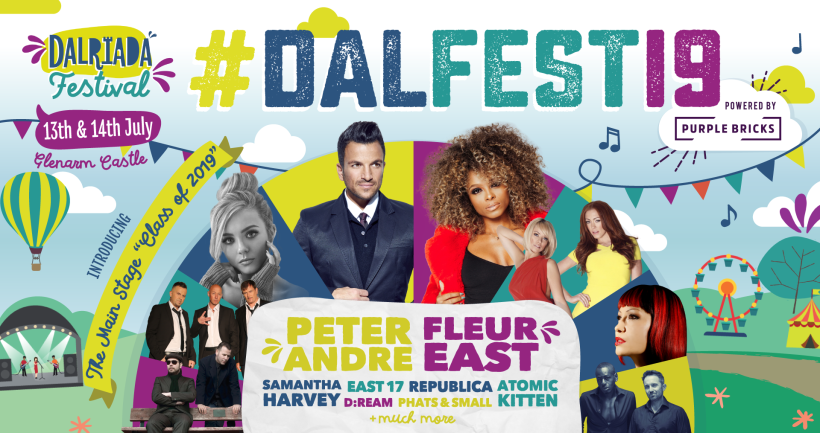 Next weekend we’ll be heading to Glenarm, a 30 minute drive down the Coast Road from Cushendun, to go to the 2019 Dalriada Festival.

It attracts over 25,000 people annually, so I can’t believe we’ve never been before! We’re really looking forward to going.

One of the biggest highlights for me is the 90s pop stars! I was born in 1984 so the 90s for me was recording the Top 40 on a cassette! Performing at the festival this year is Peter Andre, Atomic Kitten, D:Ream, East 17, Republica and Phats & Small, as well as more recent acts including Fleur East and Samantha Harvey.

Another highlight for me will be the food stalls, with lots of local producers and vendors including the street food market, chef demonstrations, pop-up restaurant and a family dining area.

Then for Niamh (my 2-year-daughter) there’s a great selection of family favourites in the line-up such as Paw Patrol, Sam & Mark from CBBC and the little green Tractor Ted!  I can’t wait to see her face when she meets Paw Patrol’s finest Chase & Marshall!

And of course, while my husband mightn’t be a fan of Peter Andre or heroic cartoon pups, I know he’s really looking forward to seeing the historic grounds of Glenarm Estate. Festival goers will have access to the beautiful Castle, home to the current Lord and Lady Dunluce and their family.

For further information and ticket details for the festival taking place on 13th and 14th July, visit www.dalriadafestival.co.uk

The last film I went to see in the cinema before my daughter was born was “The Girl on the Train” in 2016. I remember it clearly because I didn’t get to the cinema again for about a year and a half after that!

As a big fan of mystery thrillers, I really enjoyed the film. A few months ago I saw that “The Girl on the Train” had been adapted into a stage production and it was coming to Belfast’s Grand Opera House. I wasn’t sure how it would translate on stage, particularly the scenes set, well as you can imagine….on the train.

I was invited along to review the show and in short, the production worked very well on stage as a dark psychological drama.

The story is about Rachel Watson (played by Samantha Womack of Eastenders fame), an alcoholic whose husband left her for another woman.

Her life is a mess, she has black-outs, she misses her old life and she yearns for a baby that she cannot have. Her only escape is watching a couple from the train she catches every day. This perfect couple.

But when Rachel learns the woman she has been watching, Megan, has disappeared, she finds herself tangled up in the police case, both an unreliable witness and suspect. What happened to the woman with the seemingly idyllic life?

The show was slick, with subtle and clever lighting, fast set changes and an convincing representation of a fast moving train. (Even costumes play a part, with the missing woman’s dress slowly changing from red to black throughout the production.)

Every character is flawed, not least Rachel who drinks vodka straight from water bottles to escape her dark reality, and Megan’s husband Scott (played by Oliver Farnworth from Coronation Street) who has a few “Could it have been him?” moments.

You don’t need to have read the book, or seen the film, to enjoy this “Whodunnit?” stage play. It’s an intimate show, focusing on peoples’ lives and how they are linked, rather than a big flashy production. Who holds the key to Megan’s disappearance?

The Girl on the Train is running at the Grand Opera House until Saturday 15th June. 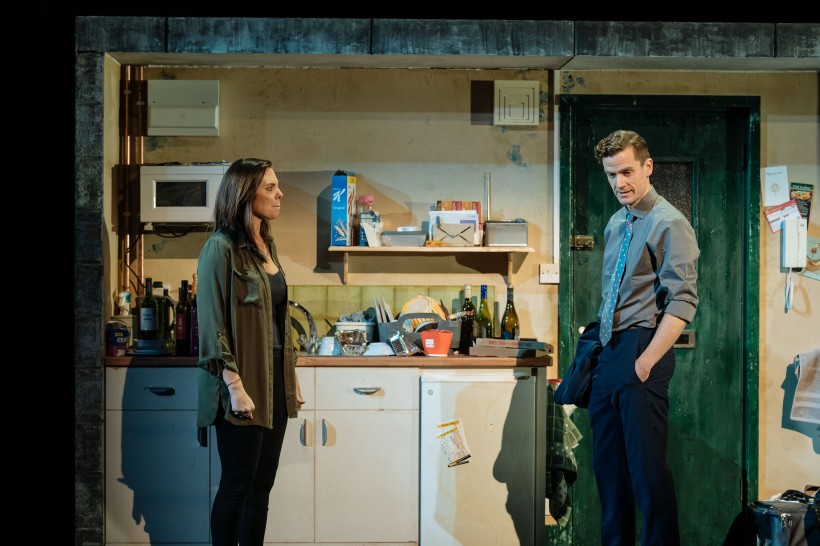 These tickets were gifted in exchange for an honest review.

Last weekend we were invited to a special preview of a wonderful family event taking place this weekend.

The 2-day Footsteps in the Forest event at Slieve Gullion, just outside Newry, is returning on Saturday 1st and Sunday 2nd June after a huge 12,500 visitors descended on the forest park last year!

Families will set off on their journey to free Finn McCool and save the fairy kingdom, meeting lots of interesting characters along the way!

The event celebrates the ancient folklore and stories of this magical kingdom and there will be artists, musicians and performers bringing the forest to life.

Niamh absolutely adored the trail, finding the fairy doors and taking part in the interactive activities. How her wee face lit up as we encountered each and every fairytale character!

This event is free (brilliant!) and there will be face painting, arts, crafts and a food market so a really lovely family day out. Here are my pics so you can see what to expect!

Last night I had the pleasure of attending Madagascar The Musical at the Grand Opera House on its UK Tour.

The musical is based on the 2005 DreamWorks film about a group of animals who live at Central Park Zoo in New York. After ten years, Marty the zebra is growing bored of his daily routine and longs to see the outside world, or “the wild”.

What follows is mayhem as energetic Marty, followed unwillingly by “the King of New York City” Alex the Lion, confident Gloria the Hippo and hypochondriac Melman the Giraffe, escape the zoo.

Soon, they find themselves washed up on the shores of Madagascar, after four conniving penguins take over the ship destined for a wildlife preserve. In Madagscar they come across a community of lemurs, led by the wacky King Julien, who loves a dance and a party. But, in the end, is “the wild” all it seems?

Alex the Lion is played by X-Factor winner Matt Terry who captures the role perfectly – a seemingly confident lion who loves to perform for the daily visitors, but is vulnerable and a loyal friend to his fellow zoo-mates.

The film translates well on stage, with catchy tunes, puppet penguins, toilet humour and more adult-friendly one-liners, including a birthday present consisting of a rectal thermometer.

For me the star of the show was King Julien, played by Jo Parsons, who won the most laughs of the night. (I think the audience was more engaged in the second half when the animals arrived in Madagascar). I loved seeing King Julien sing “I like to move it, move it”, synonymous with the film, which got the audience clapping and dancing in their seats.

The show is shorter than other productions I have been to (about 1 hour 45 minutes, including the break) so it’s perfect for little ones. The production is funny, cheesy and family-friendly. You’ll love it!

Madasgcar The Musical is running at the Grand Opera House until Saturday 27th April. 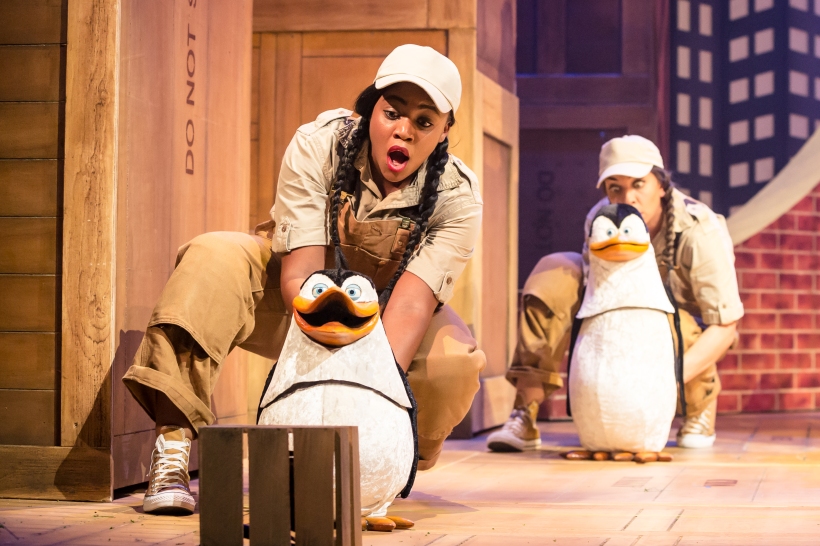 Disclaimer: These tickets were #gifted in exchange for a review.

Using this time indoors to practice my #pegloomweaving I learnt a few weeks ago with @spotsnotstripes. Just made a wee baby blanket and here’s my lovely model Cara 🎀 #pegloom #weaving
Belfast Travels lifestyle blog
Blog at WordPress.com.